Some experiences are raw and unfettered, experiences that leave you breathless and reflective that both cut deep and inspire. Today was such an experience. If this post feels like I am reaching, if its tone is strained, it is because the story is beyond my control of the English language. How does one convey in words the feel of a place, its sights, its sounds, its atmosphere, its emotion? The day we arrived a thick smog lay over the city of Delhi. Like a sickness it hung on the horizon. In just a few minutes the back of my throat was prickly and the corners of my eyes burned with it. The air can be felt like silty water. Delhi in many ways is ill. It is a sick man struggling to feed his people. To breathe the air, to feel it enter your lungs is to breathe its sickness. To walk its streets, to witness its people moving and being and living is to suffer if only a little with them. To be clear, sickness is not sin and suffering does not make a person or a people less than another. Indeed, it is through sickness and suffering that we must pass, or so I believe, to find peace and happiness.

After a light breakfast this morning I headed into Old Delhi with several colleagues and their companions. Dad was still suffering jet lag this morning and after a harrowing ride from the airport to the guest house yesterday evening he was not keen to venture into the city. So while he stayed behind 5 of us embarked on an adventure that I will not soon forget.

We flagged down a couple tuk-tuks. These are the 3 wheeled vehicles that look like the offspring of a VW bug and a dirt bike. For 100 rupees (about 2 dollars) the drivers took us into the metro station. I’ve ridden in a tuk-tuk once before on a back road devoid of traffic in Sri Lanka. This was nothing like that. This was utter chaos poured out without mixture. Bicycles, motorcycles, scooters, rickshaws, ox-drawn carriages, buses, BMWs, Jaguars, vans and people all moved, sometimes slowly and sometimes a little less slowly, in the same general direction. Like the vehicles that moved on the streets the people darting in and out of traffic were of every fashion, every age and persuasion. Poverty lined the streets like English hedgerows.

Within 30 minutes we were entering the subway. 16 rupees (maybe 30 cents) would take us into or near Old Delhi. Our destination was the Red Fort. A large red sandstone structure built by the same leader that raised the Taj Mahal. Indeed, the sandstone was imported from Agra where the Taj stands. The modern subway was a stark contrast to the chaos we left above it and what we were about to find.

I’ve experienced crowded souks in the Middle East, struggled in pilgrimage to the top of Adam’s Peak in Sri Lanka, jostled through malls in Hong Kong, stood in crowded London squares and just days ago navigated the crowds of Rome and Venice but I was not prepared for this. The narrow streets outside the station were awash with humanity. Little shops to either side sold to metro goers an assortment of edibles and merchandise. Dogs wandered amongst the people or sat scratching their sores. A rat was seen nibbling something amongst the garbage. Beggars here are drowned out amongst the movement of people and many are too weary or too sick to beg. We passed a man curled lifeless in a corner his dark weathered body exposed to the elements except for a small cloth; every bone clearly visible beneath his aged skin. What is his story? Who is this man that lays helpless amongst all these people? Is there someone that cares for him? Is someone even now struggling beneath some burden to pay for this man’s last meal? We walked on. We walked on! What could I have done for this man or the man with the deformed hands and feet we would pass or the children that would beg at the side of our tuk-tuk?

Running by palaces in Dubai the thought occurred to me that I would never want the responsibility of that kind of wealth. What might I tell God at the end of this life when he asked what I did with such privilege? “I had a great theatre room; the leather seats in my Maserati were heated.” Walking the streets of Delhi today I realize I am the wealthy Emerati. What is my answer to the wealth and privilege I enjoy?

On we went down the broken sidewalks of Delhi toward the Red Fort. Something dripped on me from an awning above (water I hope). Through dusty streets, in and out of traffic we went and the whole time a man pestered us to be our guide. A rickshaw driver, he would take us all over Old Delhi: to the Red Fort, to the spice markets, to the mosque, to the jewellery market. We declined and he pestered, we ignored and he pestered, I got quite rude with him “the answer is no!” and he pestered still. He followed us all the way to the gates of the Red Fort and then promised to wait for us and he would take us to all the places we wanted to go. Finally we agreed that should he be there on our return we would take him up on his… offer, pleading.

What can I really say about the Red Fort? It is a massive stone building of stunning architecture. Within its walls are impressive relics and structures of an opulence passed. We found a guide, or a guide found us, who walked us through the structures and told us the history and stories in an accent that made it hard to understand. I don’t like being guided through these places, mostly, because I don’t trust the history I’m being told but also because I feel rushed and then obligated to hand over my money. We wandered the grounds of the Fort and its buildings, watched children play on the grassy courtyards while patched and thin dogs bathed in the growing heat of the day. Sitting on a park bench for a break we were approached by a woman who wanted to take a picture with us, we posed. Then a group of 5 young men (studying law at a local college) asked if they could take a selfie with us. Others I could see simply stood in the distance and took their selfies slyly. Our blue eyes and western dress made us famous.

An hour or two after leaving our pestering rickshaw driver we emerged from the Red Fort to find him waiting with friends. We climbed aboard the tricycles and proceeded on an adventure that I can hardly retell. I thought I had been daring to take a tuk-tuk a rickshaw is another experience entirely. To their word they took us to the spice market. More than this they led us through the market to the wholesale spice market in a dark and filthy building. The overflowing bags of spices and chilies filled the air and we could not help but cough and sneeze and water at the eyes. They took us up a gloomy flight of stairs and then another and another. Men were sitting in the stairwells chatting and eating. We emerged on a roof top where food was being served to a group of local men. Tourists must be shown these sites often as they did not stir as we moved amongst them. We were presented with a view of the streets below us. A chaotic jumble of old and new. Then to the other side of the roof and a view of the courtyard of some monastery or mosque. Clean for India and marked by a tall ornate obelisk and a fountain filled with colourful fish. Delhi, we are learning, is a city of contrasts.

From the spice market we were taken to a silk and fabric store through narrow streets filled with vendors of all kinds. There seems to be districts of goods. Now we are passing through the shoe district, then the bangles, automotive parts and then fried foods. It was the meat market that really got me. A multi-layered cage held chickens ready for the butcher. The remains of their sisters, freshly dissected, lay atop the cage dripping their life’s blood upon the butcher’s next victims. Goats were in the streets, no doubt, destined to meet a similar end. Mutton hung openly in the stalls and fish exposed in boxes where flies were occasionally brushed away by merchants. I understand why many Indians would choose to be vegetarian.

We ended our rickshaw tour at the Mahatma Ghandi museum. The museum was surprisingly free. A group of school children loudly toured the facility in our wake and were very pleased to try their limited English with us. Outside the museum we finally stopped for a rest and small snack: chips and a cola at a local vendor. Finally, we walked through the resting place of Ghandi’s ashes. A beautiful memorial to a man that strived to bring peace to India.

We were getting really bold now. We piled 5 of us into a single tuk-tuk built for two. I sat up front sharing a single seat with the driver. There was nothing between me and the open road as we wove in and out of traffic. An ambulance desperately tried to push its way through traffic but the traffic responded reluctantly and I watched as the big ambulance stopped centimetres from ramming the tuk-tuk in front of me clear from the road. Back on the subway and then another tuk-tuk, which got lost, we finally made it back to the guest house 10 hours after we’d begun.

The conference begins tomorrow and I speak first thing. I should have spent some time going over that speech tonight but I had to get this down while it was fresh. Reading it through I am certain it will not convey what I wish it could. My first brush with Delhi will affect me for a long time. I suspect that like all great memories I will mine it for meaning and enlightenment over many years. 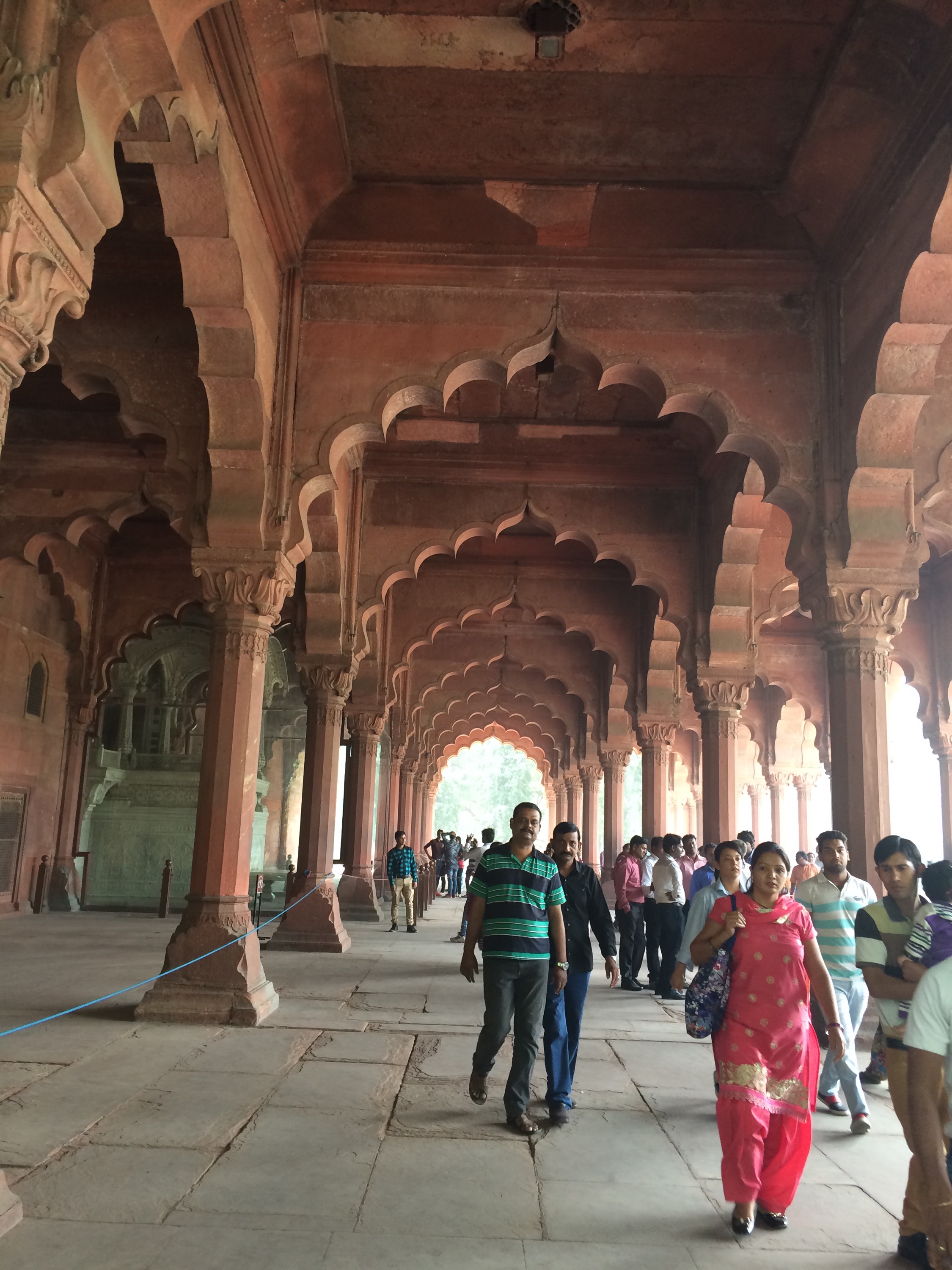 Asia, Traveling
← “Home James” A Car in Italia
→ A Mosque in Old Delhi