The air was brisk when I set out for my morning run. The sun had barely crested the horizon and the narrow lanes of Venice were shrouded in darkness. The occasional lamp cast shadows on the stone paths gliding beneath my feet. Italians are not early risers. The once vibrant shops were dark or shuttered as I wound my way surreptitiously through the city. I emerged in an empty St. Mark’s square save for a few birds and men sweeping up the litter of the night before. Past the bell tower I ran to the water’s edge and a view of a massive cruise ship lit with a thousand lights pulling slowly toward the ocean.I followed the water’s edge marvelling at the architecture of the city slowly being lit by the rising sun. A few other morning runners passed going in the other direction. The flat stone paths were broken every few hundred meters by stepped bridges spanning the canals leading into the city. Their banks lined with boats and skiffs. In a few short kilometres I entered a park; a thick bed of fallen leaves crunched beneath my feet though the towering trees still held enough leaves to form a wonderful canopy overhead. The island ended and I was forced to follow its course and turn back into its labyrinth. I left behind the Venice of tourism and entered the clean streets of Venezia’s residents. The occasional clothes line still held yesterday’s washing. Remarkably I found no dead ends but wound on and on to emerge at a canal here and enter a quaint courtyard there.
The streets slowly filled with merchants readying their shops or unloading their wares from the boats. A vegetable market was coming to life. Ahead of me a group of pigeons gathered frantically over the remains of something spilled. I thought to scatter them with my pounding feet but they would not stir at my approach and I passed by nearly unnoticed a few feet away. Suddenly a bird skimmed past my ear on the right then another and another and I found myself running in the midst of a flock of flying rats. I had visions of being pecked to death, a fitting end on a halloween morning, but gladly they simply continued on.
I soon found myself back in St. Marks Square and into the final stretch: left at the sandwich shop, right at the lingerie store, left at the bedding shop and I was sensing a pattern. Lost in that thought I missed the next few turns and required my GPS to find my way back the few hundred meters to the hotel.
Dad and I spent the day exploring Venice. We took the water bus back to the train station and picked up tickets to head back to Rome the next day and then back into the streets of Venice. We found a quaint shop for a bite of breakfast and bought a map. The map didn’t seem to help as we ended up on the wrong bus and in the completely wrong direction for the glass factories in Murano. By the time we’d finished exploring our unintended destination dad was out of energy to make it to Murano. I left him at the hotel for a nap while I ventured over the Rialto bridge and into a corner of Venice I had not seen yet. I peered into churches but avoided entering any that charged a fee. I found many that didn’t, however, and was amazed at the art work and history lying about. One church had the inner workings of a 16th century clock tick-tocking away in the corner.
On my way back to the hotel still peering in every nook and cranny and doing my best to get lost in Venice I stumbled into an Opera hall. The hall, Scuola Grande Di San Teodoro, was featuring an opera concerto comprised of many famous pieces from Mozart to Puccini and Verdi. Better yet the hall was a short walk from our hotel. I convinced dad to splurge with me and try out the opera. Its not like we are going to Venice every other day. The man that sold us the tickets literally looked down his nose at the riffraff in front of him. We just smiled and put on our best low born accents (not hard at all) and made him sell us tickets anyway… the cheap ones in the back.
The musicians dressed in period costume. Their white powdered wigs and lacey clothing had me reflecting on how idiotic we’ll likely look to our posterity in 500 years. The show was excellent and I was moved more than once by the skill of the musicians. A duet with the soprano and the baritone “La ci darem la mano” had me closing my eyes to better feel the music; though, i have no idea what they were singing.
Have you ever starred at a ceiling fan and focused on a single blade? Eventually you can track the blade and pick it out of the otherwise whirling colours above you. I like to do the same at concerts, focus on an instrument until I can hear its music through all the others. Everyone must do that I suppose. It was a wonderful concert in a lovely baroque period hall.
It was after 10pm when we returned to the hotel. As much as I like my dad I’m missing my wife and children. Lisa and I chatted via text for over two hours. Her in British Columbia and me all the way on the other side of the planet. It has me immensely grateful for the technology I’d otherwise take for granted. 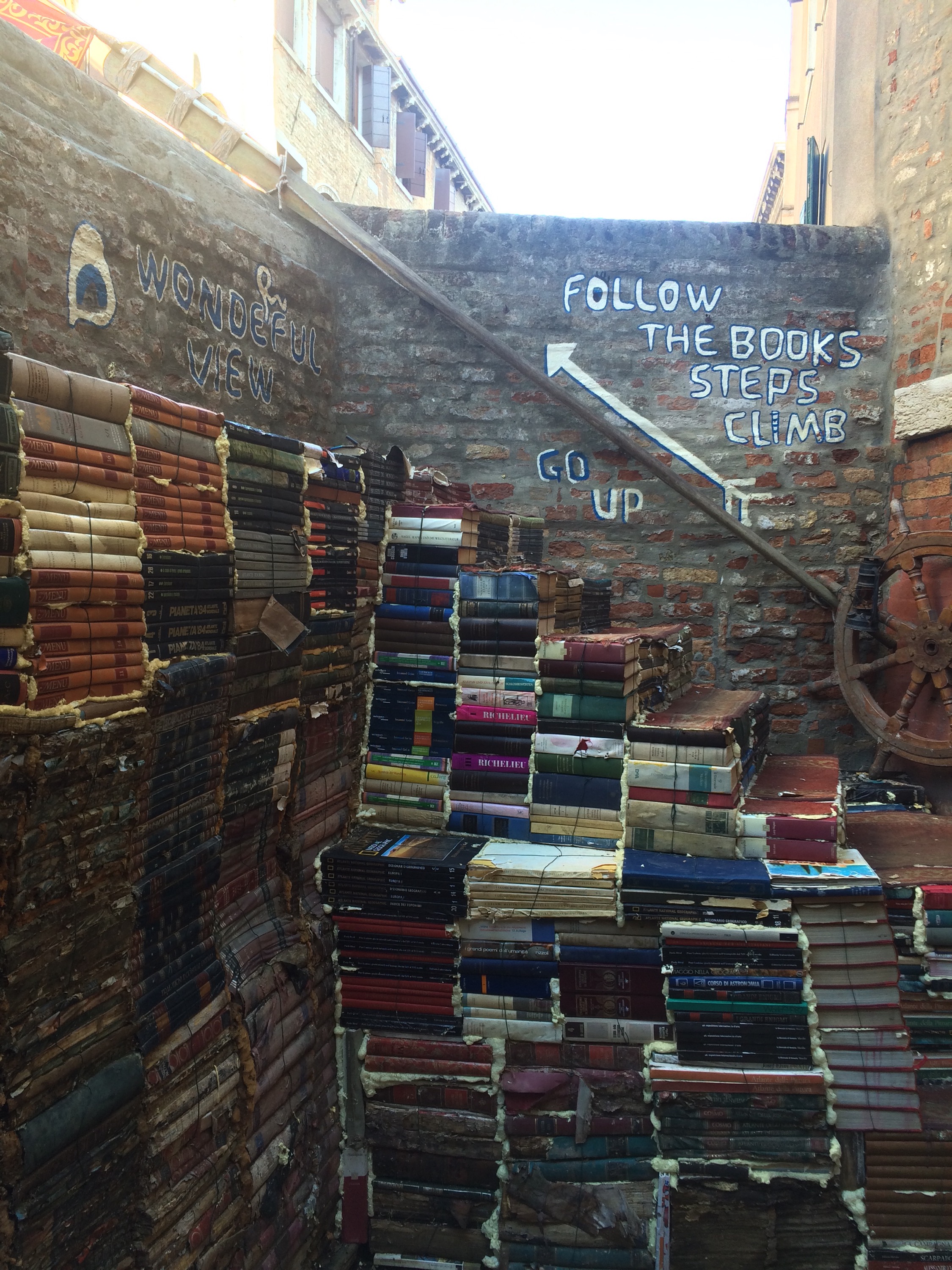 A staircase of books in a used book store in Venice. 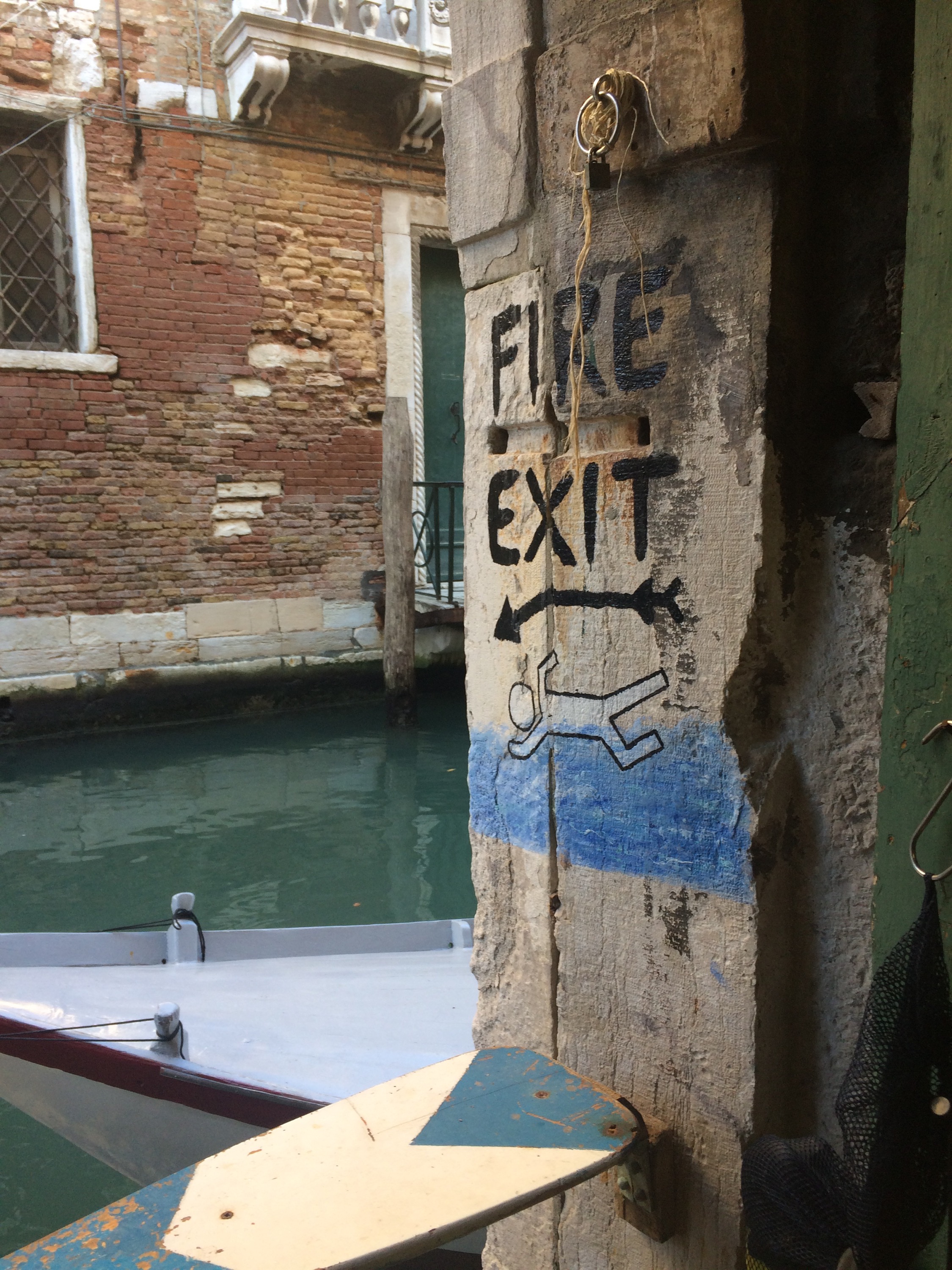 Random “fire exit” sign found in Venice during our explorations

A bookstore in Venice

Tickets to the opera.

Ceiling art in the opeea hall.